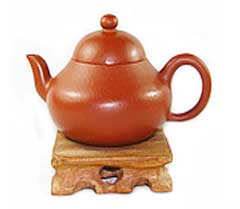 In buying a purple clay teapot, determine how many persons you would be serving tea so that you can get the right size.  The teapots come in many sizes, as shown below :

You will notice that the teapot size numbers actually indicate the number of persons that can be served. If you generally drink tea by yourself or with just one other person, then teapot size 2 would be a good choice.  You can always brew an extra pot if you have the occasional few guests to entertain.  You can also think of getting a bigger pot for when you need to entertain some guests and would be brewing more than your usual quantity.

The teapots come in various shapes to allow various types of tea leaves to maximize the surface exposed to water when you boil your tea in the teapot.  There are generally two profiles for teapots, high and low.

How to Select Teapots Using Profile and Firing Method

Shapes of Teapots Based on Tea Types:

Secondly, thickness distribution is best when even throughout the pot’s body.

v. The lid and neck

The date when a Yixing teapot was made can be determined from the kind of spout holes.  There are three kinds of spouts :

Some teapots whose capacity (Xiaopin)  is less than 150 ml were made single-holed
teapots because of two considerations:

These teapots are manufactured In 3 ways :

Watch the video of Zhou Gui Zhen ,who has been named a National Living Treasure of China, as she demonstrates how a teapot is made using a traditional Yixing method:

There are various kinds of Zisha clay but there are two general groupings of quality/grade:

Ideally used to make second-grade quality teapots which are commercially available in
various designs and are quite affordable. The natural color of this type is white.

This is a  superior  clay  known as Zisha or “Purple Clay” (it comes in various colors and not
necessarily purple).  Zisha Clay is also called original or natural clay.

The 3 standard clay constitutions  which can be mixed in a multitude of combinations are :

Yixing “earth clay” is naturally white.  Zisha  or purple clay has many natural colours, including the following which are the most valuable :

Some types of  teapots are produced from various types of clay which are fired over low or high temperature :

1. Teapots that are from absorbent clay are low-fired and are made thicker to retain heat longer which works best for  Black Tea (also called Red Tea) and Pu-Erh Tea.

2. Teapots for teas like Green, White and Oolongs  are high-fired and use finer, thinner clay and will lose heat  faster, preventing over infusion or over cooking in the pot.

II. How to Identify an Authentic Yixing Teapot

III. How to Choose a Yixing Teapot