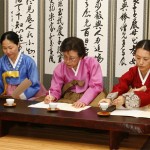 There are many tea lovers in the world who are passionate about their favorite tea drink. It is almost like a ritual : your body craves it, thrives on it even.  It has been proven, time and again, that tea has many health benefits and this knowledge has spurned an even greater thirst for it.   Tea, which was termed by Lao Tzu as the ‘Elixir of Life’, is the most widely-consumed beverage in the world and is believed to have healing properties.

Here is a compilation of some of the world’s tea masters.   Believed to have been discovered in Asia but made popular by Europeans, specifically the English,  it is now a component of  many beverages, vitamins, and health supplements due to its ability to soothe one’s mind and body.

Discover the tea masters who have unlocked the greatest secrets of the Way of Tea and understand why it is the world’s favorite drink.

Lu Yu was known all over China’s capital as  the Master of the Way of Tea. He worked on documenting all the important aspects of the Way of Tea  – from the different tea types, tea utensils and ingredients,  and was to become his masterpiece.

Li Ri Hua was a Ming dynasty scholar who drank tea to calm his spirit. He lived naturally and avoided outside influences.

Lu T’ung, otherwise known as Lotung or Lo-tung, was a Chinese poet from the Tang Dynasty who studied tea culture all his life. He was a strange man and never became an official but was known for his love and knowledge of tea.

Lao Tzu was born in Ch’u,  known today as Ho-nan province. He met Confucius while still a curator at the Royal Library. Initially, the conversation was about rites but it offers deep insight into the disparities among Taoists and Confucians.

Liang Junde was born in July 1948 in Xingcun, Wu Yi Mountain, to an old and well-known family whose ancestors were engaged in the busines of tea. He grew up learning about tea processing and production. At 15 years old, he became an apprentice and achieved mastery in picking, drying, withering, fermenting, roasting and smoking of black tea. He became the foundation of the manufacturing group for Lapsang Souchong Black Tea. 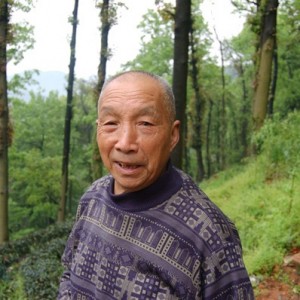 Weng Shang Yi has been into tea making from time time he was 14 years old.   He has dedicated his life to his love for tea and has become a respected icon among tea fans in his locality and among government officials, too.  He worked with organizations involved in tea production and was consulted on issues regarding farmers’ issues on profits since the beginning of the People’s Republic of China.  During that time, he tutored students and participated in government sponsored Long Jing competitions. He has won  first place in many competitions and has been elevated to the status of Master.  He is well known for his traditional methods in creating superior Longjing.  Longjing te ais also called Dragon well tea and is a type of green tea that is pan-fried and is produced from Hangzhou, China.  It is made by hand and is renowned for its superior quality.

Luo Shao Jun is  the Director of the Hangzhou Institute of Tea Supply and Marketing in China.  She is also the director of National Tea Quality Control Center and Editor- in-Chief of the Chinese Tea Processing magazine. She frequently gives her opinion on matters regarding tea and is asked to judge teas in China and all over the world.  She has made many recommendations on the improvement of ecological practice and has consistently advocated tea among the youth to preserve China’s culture. 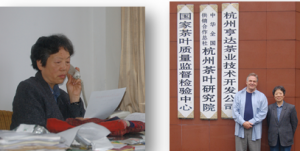 Murata Juko (c. 1421-1502) is known as the founder of Chanoyu in Japan’s cultural history. He developed the wabi-cha method of enjoying tea which used native Japanese

Takeno Joo is a master of tea and a renowned merchant during 16th Century Japan.  In Japan’s cultural history, he is listed as an early advocate of wabi-cha who followed Murata Juko and was a chanoyu teacher to Sen Rikyu. 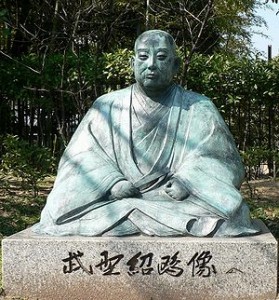 Sen Rikyu was in 1522 in Sakai.  On his birth, he was given the name Yoshiro. During his early youth, Yoshiro began studying the tea ceremony .  In the beginning, he studied  traditional styles with Kitamuki Dochin as his mentor. Later on, in a small tea hut, Yoshiro learned a contemporary style from Takeno Jo-o.

The four principal qualities that should be observed in the tea ceremony:

The following concepts  that are now observed in the contemporary Japanese tea ceremony that were introduced by Rikyu are:

•           The doorway must be low and require  guests to bow low when they enter to
show humility as part of preparing for the ceremony. 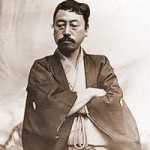 Kakuzo Okakura was a Japanese writer and curator of art who wrote the famous ‘Book of Tea’ in 1906. He grew up
in Yokohama and because his family was wealthy, he was able to study at the Tokyo Imperial Institute where he earned his Master of Arts degree in 1880. He was an art expert who also wrote well-known books in English and is recognized for his efforts in teaching Asian art to intellectuals in America. 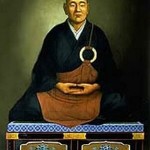 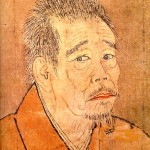 Ikkyu( 1394 – 1481) was one of the non-conforming and eccentric Zen masters during  medieval Japan’s Muromachi period. He was a Rinzai scholar, monk, painter and  master in calligraphy and contributed greatly to the Zen arts.  One of his disciples, Murata Shuko, was Japan’s first master of tea.

Furuta Oribe (Furuta Shinegari – 1544 – 1615) was a
Japanese samurai and a master of the tea ceremony. He was a strong influence on the development of the art of tea  during the late 16th and early 17th centuries. He was a known master of tea and art connoisseur. 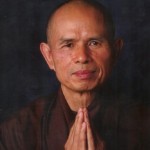 Thich Nat Hanh was a Vietnamese Buddhist monk who worked during the Vietnam war for peace between North
and South Vietnam.  In 1967, his efforts at peace earned him a nomimation from Martin Luther King, Jr. for the Nobel Peace Prize. He lived in exile in France where he taught, wrote, and aided fellow refugees all over the world.

He taught that family life was important and his recommended activities included meditation, tea ceremonies and talks of Dharma.

The tea masters listed here are all well-known and respected in their individual cultural histories as well as internationally. They have introduced tea ceremony as an important way of life and has enriched the art of tea for tea lovers to enjoy for all time.