d)         a shallow bowl called  ‘Cha He’ which has an open spout  or a neck.   The Cha
He is used to show the dried leaves to visitors before drinking the tea.   Its neck
is designed to help easily add the loose tea leaves into the bowl.

f)          Smelling cups are tall with a small hole and  as implied by its name, is used  to
help the guests appreciate the tea’s full aroma while at the same time appreciate
the color of the tea. 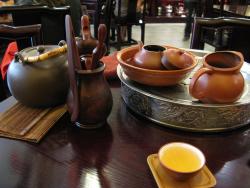