Gong-fu Cha ceremony will need a big enough space to  accommodate a table suitable to hold the number of utensils required.  The allotted space should also be peaceful and calming and this kind of ambiance is created with incense, flowers , music  and even songbirds. 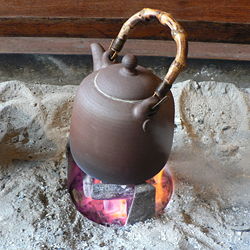 2. Measurement of the tea and placing in the brewing pot filled with water. 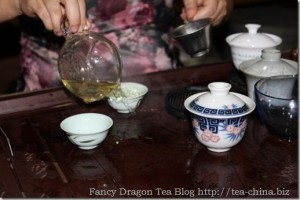 3. The infusion of the wonderful aroma. 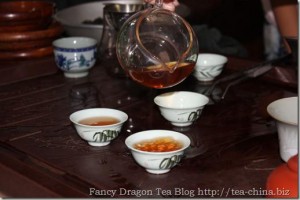 4.    Infusion of the wonderful flavour.

4.   5.  Infusion of true and long-lasting friendship

o   The next brewings follow the same steps. High-quality Oolong tea can be re-used as much as  5 or 6 times, with subsequent brewing better than the first.

o   The 2nd  round of infusion is considered as  the real infusion. When doing the second & third infusions of  the Oolong such as Tie Guan Yin,  the water must be allowed to soak in the tea leaves for about 10 to 15 seconds prior to straining.

o   The 4th & 5th round of infusions will take about  20 seconds whereas the 6th  and 7th  infusions may take longer at 60 seconds.

o   After this round of infusions, the tea is considered exhausted or spent although in some places people may still continue to use them for brewing.  In case the leaves are still re-used, the leaves are usually immersed in water for at least 2 minutes.  When brewing Pur-eh or Long Jing Green Tea, the brewing time may change.

o   The length of brewing can also be affected by other considerations such as the tea’s quality, the water’s quality and altitude. 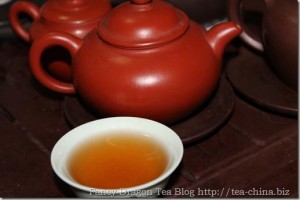 Learn the unique and interesting secrets of Gong fu cha ceremony from this video demonstration of tea scholar, Didi Liu :

In this second video, the complete process of tea preparation using authentic tea set and the enjoyment from the procedures is shown in detail :