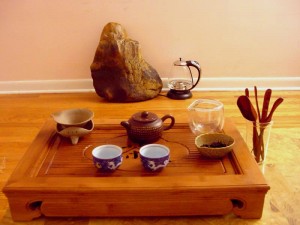 Ideally,  teapots required in Gong-fu Cha are made from unglazed Yixing clay which is reputed to produce  tea pots that have the ability to improve the tea’s taste, quality  and scent.

Yixing clay is known to cause mixing of the  flavours from previously brewed tea into any tea brewed  in the pot thereafter  because the clay has holes that retain tea oils.

The  clay is also resistant to even extreme temperatures for  prolonged periods.

Small pots are recommended for better control of temperature and brewing time.

Three pots are generally used  in Gong fu cha– the biggest one is to boil the
water; the second one is to brew the tea and the smallest is used to serve it.

Tea cups used in Gong-fu Cha are usually small in size.   They are meant to hold tea that one can finish in just a gulp or  two.

Only boiled water is recommended for Gong-fu Cha.  Distilled water is not advisable as it produces tea that tastes flat.  Spring water is still the best water to use if it is  available.   Spring or pure water that is filtered is poured from height into the pot in order to oxygenate it.

Water is also used to warm the utensils, wash  and  brew the tea.