What Is Oolong Tea?

Oolong tea is one of the most delicious types of tea available on the market and is a prized drink in Asia, particularly in Taiwan and China, both major producers of this delectable liquor. Not as well known in the West, but Oolong tea is like a secret that, once revealed, news of it will spread like wildfire.

Tea is manufactured partly by skillfully subjecting the leaves and buds of the Camellia Sinensis plant to different levels of oxidation, and the differences in oxidation, along with other crucial steps in the tea making process results in thousands of unique and interesting tea varieties, ranking high among them is Oolong.

Oolong has a unique taste, not as grassy or astringent as green tea and not as pungent or woodsy as black tea.  Oolong is characteristically complex and varies greatly from one to the next, but generally a high-quality Oolong tea is medium bodied, bright, brisk, and full of delicious flowery, sweet, stony flavor with little astringency, its aroma is described as bold, honey-floral, fruity, herbaceous, and smooth with a lingering finish. The difference in Oolong comes from the terroir of the tea leaves and the way they are processed into tea. 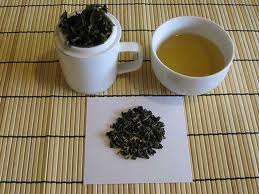 This broad range of semi-oxidation levels allows for much creativity and style in manufacturing Oolong tea. Hence, Oolong comes in a variety of colors ranging from a delicate yellow-gold to rich amber; a great selection of flavor profiles, as noted above; body characteristics that go from light (greener) on one end of the spectrum to heavy (blacker) on the other end; and an artistic variety of leaf styles from full-leaf to ball-rolled.

While oxidation is critical in defining Oolong tea, there is also much more that goes into producing this amazing tea.

The Processing of Oolong Tea

Oolong is the most complicated tea to produce; it has more steps in its processing than any other tea and requires the skill of a highly-trained tea master to coax out the intended flavors and shape of the leaves. Processing leaves to make Oolong can take anywhere from 10 to 18 steps, depending on the tea maker.

Quintessential Oolong comes from two primary, well-established tea producing regions, with each area producing a superb Oolong, and they are China and Taiwan. The Fujian Province of China is from where Oolong tea originated, and the revered Wuyi Mountain Oolong reigns from here. Taiwan is particularly well-known for its Formosa and Green Oolongs.

Each area will have variations in processing Oolong, but in general, it goes like the following:

Wuyi Oolong is sometimes called “Rock Oolong” because the tea bushes grow between the rocks of jagged-edged cliffs shrouded in fog and cloud-cover. This environment contributes greatly to the tea made there.  Only tea grown in these specific high-altitude mountains will result in its distinctive flavor. It’s regions like this where the tea plants used in Oolong thrive.

Picking the leaves off a side of a mountain is a particularly arduous task, and is one of the reasons that these Oolongs can be quite pricey.

Oolong tea is made from large leaves that have grown to a certain size, ensuring that they are chemically balanced to deliver the desired characteristics. The leaves are typically picked in mid-afternoon. The leaf picked depends upon the tea maker, but typical pickings include a bud with three leaves (including stem) as in the ball-rolled types and single leaves.

Once the leaves are picked, the tea making processing moves along quickly, not stopping until the product is finished.

Primary Withering of the Tea Leaves

Freshly-picked leaves are then set out in the sun to dry. They are typically placed on a tarp in a single layer. This starts the withering process, generating heat in the leaves. The heat requires that the tea leaves be flipped at least once during the hours they remain in the sun. After several hours, workers gather the leaves and take them indoors.

Withering the tea leaves is continued in an enclosed environment to allow them to rest before processing. The leaves are placed in roomy single layers on large bamboo trays until they wilt and flatten, often sticking lightly to the bamboo tray. This step of withering takes approximately 30 minutes.

At this point in processing, the tea leaves are manipulated to encourage the release of chemicals that will give the finished tea its flavor, color, and other characteristics. It’s an important part of the oxidation process, and is carefully supervised by the tea master as varying oxidation levels greatly affect the flavor profile and characteristics of tea. The manipulation is is done by rolling, twisting, tossing, or bruising (a more vigorous form of tossing) the tea leaves. The method used is dependent upon the tea master’s desired outcome.

Tea leaves are oxidized by exposing them to air. Tossing the leaves into the air breaks open the enzymes, polyphenols, proteins, and carbohydrates that is inherent in the leaves. Taiwanese manufacturers of Oolong, typically begin this step by setting the tea leaves in large baskets made of bamboo, and then tossing them. The tea leaves knocking against one another as well as against the bamboo, bruises them, and allows for distributing the chemicals through the leaf, creating more uniform oxidation in the leaves.

After a toss, workers allow the leaves to rest and to continue oxidation. They repeat this process until the tea master determines that the leaves have oxidized to the level desired for his unique variety of Oolong. The leaf color eventually turns to brown, as any plant detached from their root will eventually turn brown.

The manipulation of the leaf can go on for several hours, giving the leaves a rest between tossing or rolling, etc. It usually begins late in the afternoon and can go on until just before dawn the next day. The tea master evaluates the leaf to determine when it is ready to go on to the next stage. Sometimes it is determined by seeing a certain color or smelling a particular scent in the leaf. Only the experienced eyes and nose of a tea master knows when it is time. 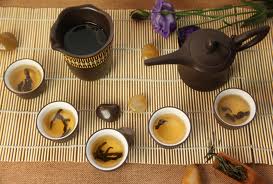 A point arrives when a tea master decides that he want the leaves to stop oxidizing, and this could when the leaves have reached oxidation levels of anywhere from about 20 to 80%. To ensure oxidation stops at the desired level, the tea leaves baked or fired.

Like most stages of tea processing, there are at least two steps in this process as well. In the first step, tea workers place the tea in ovens or pans (pan-frying) over very controlled heat, starting out at about 160 °F, and leave them bake for several minutes. They then remove the leaves from the heat and place them in bamboo bins to cool. This is repeated many times. During cooling periods, the leaves are shaped – rolled into balls, knotted, or given a slight twist. Again, it is a fine art to judge when this process is complete, taking the skills of a tea master to judge it.

Following the final cooling of this stage, the Oolong tea is ready to be packed for selling or stored.

The Amazing Varieties of Oolong Tea

There are many superb varieties of Oolong tea that you might be interested in trying. What follows is a brief description of several of the most popular Oolong. Note: Oolong tea is also referred to as Wu-long and Wulong, but they are the same tea by a different name. In China, Oolong tea is commonly referred to as Black Dragon, and of course there is a legend behind the name:

A hunter, with skin as black as a dragon’s, had tea leaves stuck in the foot of a hunting bag. Having settled there a lengthy time, the leaves oxidized and browned. The browning triggered a highly appealing aroma, and due to this, a certain tea was named for him – Black Dragon.

This tea is from Taiwan, and is so highly-prized there that in the 1980’s Taiwan halted exports of it to keep it available for local consumers. Fortunately, a few local tea consumers are in the export business.

Qualities inherent in Formosa Oolong are due to its unique growing environment in the northern mountains of Taipei, near the Tropic of Cancer. The combination of a sub-tropical climate and high-elevations are perfect conditions for the leaves used in this tea, giving Formosa a deliciously dark and fruity character.

A most eminent tea producing areas world-wide is on Wuyi Mountain located in the northwest region of China’s Fujian Province. Mount Wuyi is a very special place and is a protected part of Chinese heritage; in 1999, the UNESCO organization designated the mountain as a World Heritage Sites.

Wuyi Mountain’s tea workers and tea masters, who work to cultivate and harvest tea plants and produce tea, develop an incredibly delicious and complex Oolong that is sought by tea connoisseurs around the world.

Wuyi Oolong teas carry sweet, floral flavors and fragrances that is a trademark of Oolongs, but are further enhanced with savory mineral tastes and an earthiness that only can only come from Wuyi Mountain’s tea bushes. Wuyi Mountain teas have many interesting tastes and aromas, which vary by a tea master’s choice of oxidation and firing techniques.

Wuyi Oolong teas are described in many different ways, which including the following characteristics.

*Typically milder and sweet in character.

This Oolong tea comes from plants cultivated on the Phoenix Mountains in China’s Guangdong Province. An interesting aspect of these plants is that they are really tea “trees”; they grow from a single trunk that reaches heights of 15 to 30 feet – quite unusual for a tea plant.

With long dark-brown leaves, this Oolong is a light-yellow nectar with a floral aroma, a honey-peach flavor, and a very satisfying aftertaste.

Dan Cong Oolong is considered a “Black” Oolong due to its high levels of oxidation and baking. Oxidation is typically higher than 50%, but can be as high as 90%, nearly reaching traditional black tea oxidation of 100%.

Dan Cong Oolong was originally a “Tribute Tea” made for an emperor of the ancient Song Dynasty.

TieGuanYin Tea is a highly-celebrated Oolong, which comes in numerous varieties. What makes it special is its complicated 18-step processing of the dark green tea leaves and the Chinese Province from where it originates. TieGuanYin is produced in the Fujian province of Anxi.

As with most tea, there is a legend to be told about TieGuanYin. The name translates to “Iron-Goddess-of-Mercy”, which is how the Chinese often refer to this tea. Its legend goes like this: 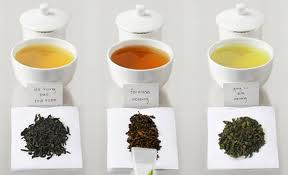 On course to his tea bush fields, Mr. Wei, a humble farmer, would pass a ruined temple that had a statue made of iron honoring Guan Yin, Bodhisattva of Compassion. Touched by the temple’s magnificence, Mr. Wei decided to care for and restore the statue. With broom and incense he had been cleaning the temple two times each month for many months when a goddess came to him in a dream. She told him a secret treasure was hidden out back of the temple and that he should find the treasure and share it with others. In his search behind the temple, Mr. Wei found a tea shoot. Planting the shoot, it grew into a huge plant, which he did share with neighbors. Leaves from this bush made a sweet and delicate tea, which was hence named Iron-Goddess-of-Mercy in honor of the kind goddess.

Tie Guan Yin Tea is a high-quality tea and is known by several different names, including:

These TieGuanYin varieties are results of variations in processing, unique in their own way, yet all having high standards established by tea makers of the Tie Guan Yin tea.

This is a simple explanation for the processing of the magnificent Oolong tea. Processing Oolong can have several complex cycles of oxidation, shaping, and over/pan frying. Creating fine Oolong tea has numerous art forms that result in one of the finest tea classes available.